Granite Peak as it stands now is one of the oldest ski areas in the country. Started by a group of winter enthusiasts the history of skiing on Rib Mountain is rich in tradition and continues to develop into one of the Midwest's top ski areas.  Below is a comprehensive timeline of events that shaped the ski area into what it is today! Enjoy.

The Wausau Kiwanis Club donated a few acres of land to the State. The State subsequently acquired another 120 acres.

The Kiwanis Club raised funds for the purchase of an additional 40 acres for the ski area in 1937.

When the ski area opened on the slopes of Rib Mountain in 1937, it was one of the first ski areas in North America.

Stowe in Vermont had opened a few years earlier in 1934. Sun Valley in Idaho had become the nation's first ski area in the western states in 1936. The Rib Mountain Ski Area opened in 1937 with 160 acres. The ski area opened with six runs and a half-mile long lift powered by an 85 horsepower Ford V-8 motor with a standard truck transmission. The area also had a very small 20' by 60' base chalet for skiers to warm up in.

At the time, the new ski tow at Rib Mountain was the longest ski lift in the country.

A local businessman, Fred Pabst, operated the ski area from inception through 1947.

Fred was a pioneer in the ski industry. Renowned for his creation of J-Bars and T-bars, he owned and operated 17 different ski areas at one time! In 1969 he was elected to the U.S. National Ski Hall of Fame. (Yes he is related to the famous Pabst family, his Grandfather was the founder of Pabst Brewing Co of PBR Fame!)

1938 - The Marathon County Civic Corporation, a 501 (c) non-profit created by the Chamber of Commerce.

The MCCC was “To operate exclusively for charitable, educational or recreational purposes and, in specific areas within the county and to handle all financial matters relating to, but not limited to the Rib Mountain State Park and Rib Mountain Winter Ski Area. The first function was to raise funds for a permanent ski lodge/chalet. Theatre tickets were sold for fundraising and in December 1938 the building construction began.

The shelter house, probably the finest structure of its kind in the midwest states,” as described in the Wausau Daily Record Herald, hosted members of the Wausau Ski Club for the first official function of the lodge featuring a dance, fashion show, and exhibition of winter sports equipment. The building which cost $32,000 to complete still stands and is the “Historic Chalet.”

After a number of lackluster snow seasons, 1940 breaks through providing snow-covered slopes from November through March. Ski Trains are scheduled from Milwaulkee and Chicago through the season. A toboggan slide is also begun with water pipes installed to the top of the mountain in order to ice the slide over. “Snow Reporting” is started! Reports are dispatched are wired to Milwaulkee and Chicago and more by a local Camp Rib Mountain Youth.

Over the next two decades the Chamber, through the MCCC and the State, through the State Conservation Commission, and later the Department of Natural Resources, worked together to run the ski hill, finance projects, and develop it. The Chamber aggressively marketed the ski hill to Chicago, Milwaukee, and the surrounding towns in Wisconsin. Additional parcels were acquired by the State. Some of the land was dedicated for ski area use but most of the land was added to the general use portion of the Park.

1954 - Snowmaking Technology was invented in the Catskills of New York. 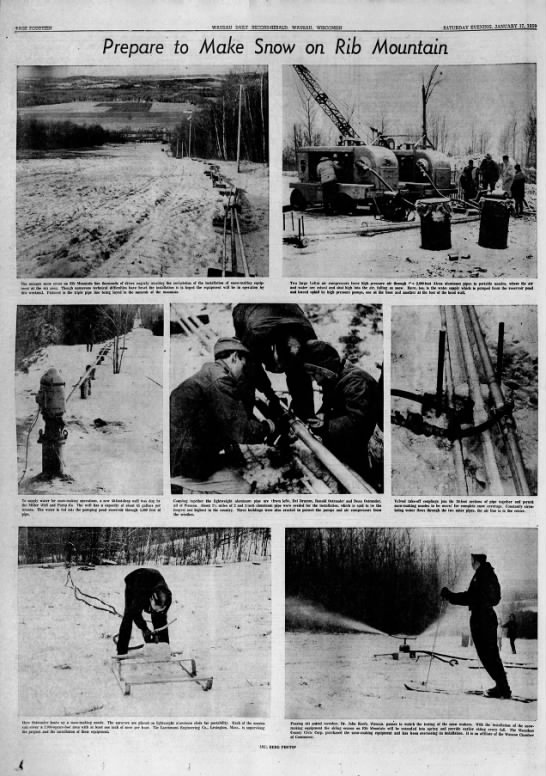 28 large spotlights ranging from 500 to 1500 watts in capacity are mounted on seven poles on the lower open slopes. Night skiing is offered initially two nights a week and the tickets are $1 for adults and $.50 for those 17 & under!

The Shelter House receives a $93,000 upgrade providing indoor bathrooms, a ladies' lounge, and a large glassed-in sun porch providing unobstructed views of the ski area. The area is dedicated with a huge celebratory weekend in January of that winter season.

1958 The First Snowmaking Equipment is tested on Rib Mountain

By January of that year, snowmaking equipment begins to be used by Rib Mountain Ski Area. Equipment was still being understood and took quite some time to master the snowmaking skills.

A new trail built off to the west of the T-bar will extend from top to bottom and is named Duskey Bowl in honor of Joseph P. Duskey, a veteran local skier, providing the first good intermediate ski area at Rib Mountain.

The area consists of 6 trails, Mis-Tree Run, Main Slope, a Racing Trail, Duskey Bowl, Lower Duskey and Birch Run. The area has a number of rope tows to the top and a T-Bar.

In 1964, local businessman, Carmie Oliva was recruited to operate the ski area. With the approval of the State, the MCCC leased the area from the State and then subleased it to a new, private corporation, Rib Mountain Lodge & Ski Corporation, owned by Carmelo Oliva. His tenure coincided with years of major growth in the ski industry, and skier visits increased.

20,000 feet of underground pipe and 4,000 feet of above-ground distribution pipe is also installed. Two additional T-Bar lifts are added along with a short rope tow on the learning slope. New equipment is installed in the kitchen and a new rental building is erected. Unfortunately, the 1965-1966 winter sees only 35 days of skiing as a snowmaking pump fails most of the season and natural snowfall is minimal.

1969 - A chairlift is approved to be installed at Rib Mountain State Park. 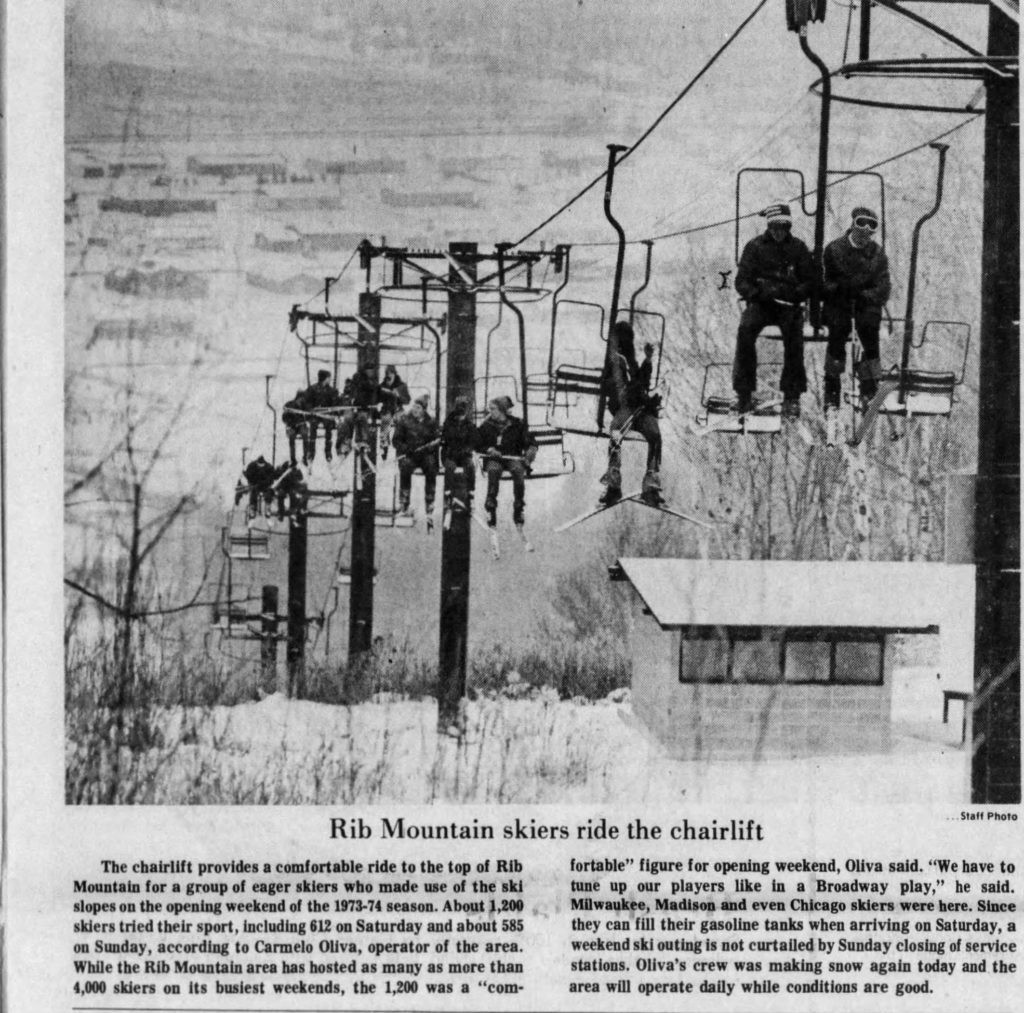 It was later opened right before Christmas of that same year. The Double Chair will go to the top of Rib Mountain. In addition to the chairlift, Miss-Tree trail has been widened and a new tow rope was installed. The Historic Chalet also debuted a new “sun deck” which is still in use to this day. In total, the resort now has a chairlift, tow T-bar, and four rope tows for skiers.

6 inches of snow drop a few days before Christmas enabling the ski resort to open 100% immediately. Carmelo Olivia stated to the Wausau Daily Herald, “It was one of the most comfortable openings in many years. There was snow, sunshine, and mild temperatures.”

The new chair is located between Dusky and Birch Run.

The MCCC and Rib Mountain Lodge and Ski Corp. (Olivia), enter into a new lease agreement with the Department of Natural Resources, whereby they became joint lessees.

Completed by Sno-Engineering, Inc., a consulting firm that specializes in development of ski areas. The project was initiated and underwritten by the MCCC.

The operator of Rib Mountain Ski Corp. since 1964 announces his intentions to retire and begins the process to sell his lease arrangement to Neal Mix. Today, Mr. Oliva, and many members of his family, own and operate the locally well-known and very popular Carmelo's Italian Restaurant, located at the base of the ski area. 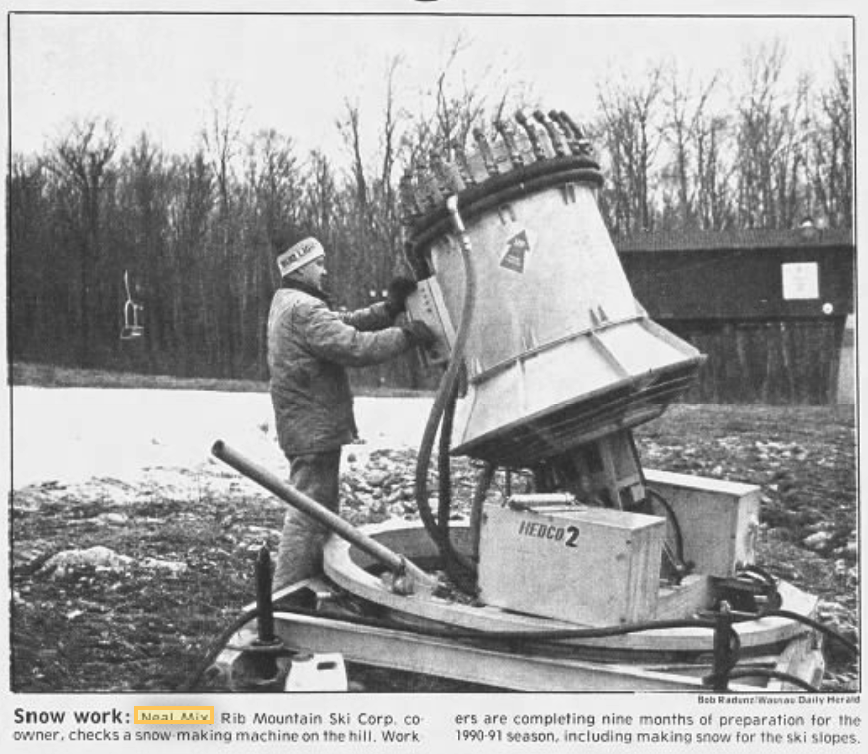 He immediately refurbishes the chairlifts, purchases $60,000 in rental equipment, and taps into the Rib Mountain Sanitary District for additional water for snowmaking purposes. Miracle Ski Trail is added to the ski area.

Rauschl’s Revenge ski trail is opened up. $700,000 is invested into the ski hill by co-owners Neal and Mary Ann Mix.

Over the next few years, the Mixes attempt to find financing to work on developing the Master Plan but are unsuccessful in raising the Capital necessary to continue upgrading and expanding the facility. The Mixes put the ski area up for sale after numerous attempts to find capital for improvements but no potential buyers came to the rescue.

The next decade sees minimal improvements and advancement towards the 1984 Master Plan as intended due to financial troubles.

Neal Mix, owner since 1986, announces that he and his wife will retire and do not intend to renew the lease to operate the ski area when the lease ends in 2000.

Rib Mountain Acquisition Co. is founded and receives a $15,000 grant to search for a private entity to operate the ski hill.

Charles Skinner, Jr. of Duluth, Minnesota and co-owner of Lutsen Mountains in Minnesota, signs a 30-year lease with the Wisconsin Department of Natural Resources to run the ski area in April of 2000. Skinner renames the ski area “Granite Peak” in hopes to attract more attention and notoriety. Skinner and the DNR agree to immediate upgrades in turn to $8 million over 3 years, including new additional runs on both the east and west side of the current ski area, new chairlifts, new snowmaking equipment, new rentals, new buildings, technological improvements, and ticketing.

30 additional ski trails are cut on the East Side of the resort doubling the size of Granite Peak in one summer. Two new high-speed, detachable lifts, are installed and open for the season. The Comet 6-pack and Cupid Quad take lift rides from 8 minutes down to 3 to the top.

21 New Trails & Dasher Quad open in the West. The resort also opens up the Sundance Chalet. Additional seating, food cafeteria, and outdoor seating areas open to the public. The Sundance Chalet is also used in the summer for wedding receptions, corporate events, and more. Along with the additional runs, more snowmaking is added across the resort. 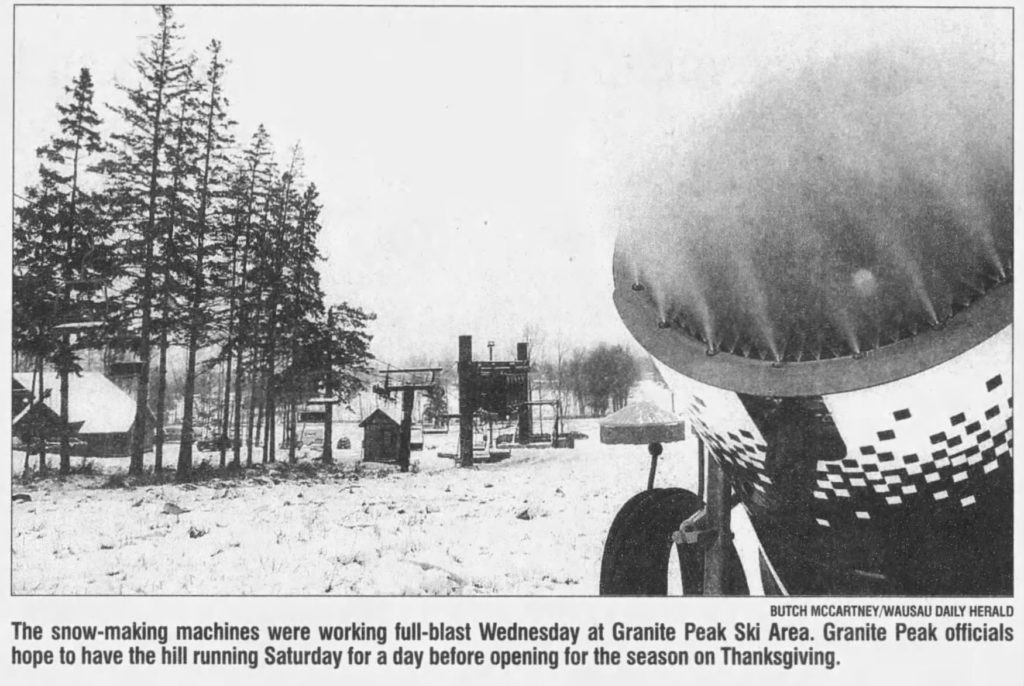 Granite Peak operates its Comet 6-person chairlift in the fall for the first time offering up scenic chairlift rides.

In the winter of 2005/2006 Granite Peak closes for the ski season after attracting over 100,000 visitors for the first time ever.

Charles Skinner, Jr., President of Granite Peak, proposes a $50 million expansion that includes 150 additional acres.  This leads to years of discussion with the DNR and revitalization of the State Park Master Plan.

The entire ski industry closes by March 20 as the COVID-19 pandemic sweeps across the country.

The GWPP is established with help of the Chamber of Commerce and local businesses for the further development of the region.  It begins assisting in garnering the resources, funding and tools for economic development projects. These include the redevelopment of the Wausau Mall into green space, retail, and more. The GWPP hires SE Group to do a Recreation Needs Assessment Study of the Rib Mountain State Park and Granite Peak Ski Area.

Rib Mountain State Park asks for input on four options for recreation expansion including new ski trails, mountain bike trails, and public access points. The options range from minimal changes to large-scale options including a lift on the south side of Rib Mountain that would allow for mountain biking year-round.

Summer 2021 - Over $3 million in Capital Improvements

The upgrades will improve snowmaking across the resort, replacing old technological snowmaking sticks with improved SMI Grizzlies that can make snow at high temperatures more efficiently. The resort continues to upgrade lighting, switching from fluorescent light to LED. The Historic Deck is also getting a facelift with new furniture, heating elements, and a stage.