It's been a crazy few weeks as our team finished up snowmaking and I got the flu.  I was out for a few days unfortunately early this week and I'm sorry I haven't written in a little bit.  It is my intention to write one of these every week.

Our snowmaking team finished up their West to East run last week and I'll admit we did have some challenges.  If you were here over the weekend you probably noticed a few huge mounds out there (one outside of my office I liked to call Mount Mystery) and some terrain that was created due to these snowmaking whales.

1. It was so cold that the amount of snow we were making was impossible to turn off.  Well not impossible, but it could cause a catastrophe if the water didn't drain fast enough causing frozen pipes and possible blow outs.

2. We had a few of grooming machines go down with mechanical issues.  You may have seen one on Elk that had to be towed off due to a blown wheel bearing.  It happens, these things are huge and have a lot of moving parts.

3. We made so much snow we had to pick and choose where it was more critical to push out and leave the other piles where people should have been able to ski them like on Upper Dusky, High Traverse, Woodspur.  Areas like beginner areas, blues and traversing trails were top priority.

I skied Monday morning as well as today and the skiing was off the charts good.  So was the weather.  If you have some time and want to ski or ride in some falling snow - Thursday is your day!

Tonight into Friday we are expecting 6-9" of snow. This will only add to our stellar conditions, boost our base depths, adding to our moguls and if we get on the higher end it will really get the tree skiing to go off.  The trees in the West are skiable right now but this will really help them out as well as the other glades across the mountain.

Today Travel Wisconsin - The Department of Tourism for Wisconsin - is on site doing a huge video shoot for winter activities that will air next year.  I couldn't be happier to have them here and under such a perfect bluebird day for them!  For the past few weeks our team has been coordinating with talent agencies, the Howdy Gang (a production company) and the the State on this shoot which you'll see next season.  Their team has been great and it was awesome to meet the Acting Secretary of Tourism, Anne Sayers, and talk shop about Wisconsin Tourism and our region!

Ok now THE WEEKEND & THE COLD

I'm sure you are all aware of the Arctic Canadian cold coming down from our friends to the North.  I haven't heard Polar Vortex said yet but it will be cold, who cares what it's called.  I hate cancelling things.  I truly do but I've been down this closing / cancelling road before. It is difficult but at the same time it is necessary sometimes.

This weekend we will still operate during the day but we have made the call to cancel all our Family Festival events, and CLOSE AT 5PM BOTH SATURDAY & SUNDAY.

WE WILL BE CLOSED FOR NIGHT SKIING SATURDAY & SUNDAY. 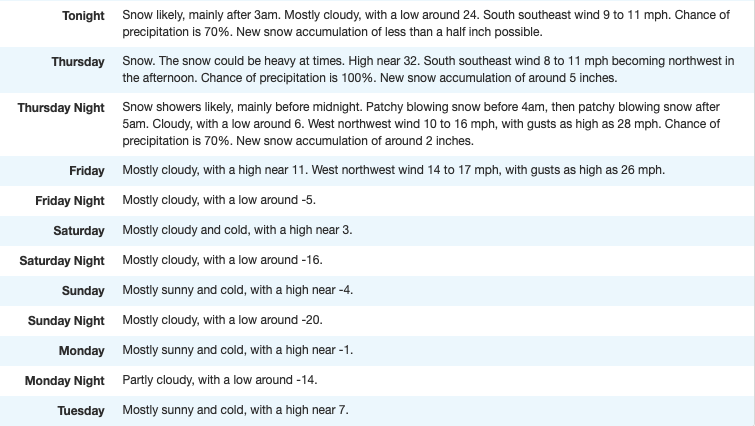 We realize that you are Wisconsinites and can deal with the cold but many of our night skiers are kids.  Kids as we all know can make choices that might not be in their best interest!  This was our #1 reason in making this decision.  During the day the sun will be out and the winds will be minimal but at night with that sunsetting the temps will feel closer to -30 a very dangerous temperature to be involved with anything outside let along on a lift or moving fast downhill.

So for this weekend I suggest a good movie on Saturday night and then on Sunday there is this little game on TV called the Super Bowl.  I know the Packers didn't make it in but it's still an event and the commercials are damn good.

I have felt the wrath of Tom Brady in my time.  As a Jets fan (yes sadly I know)  and as a New England ski resort operator.  TB & The Pats ruined many Super Bowl Sunday attendance over the last decade - he cost us millions - no joke.  Either way you have to admit TB12 is pretty good, as is his counterpart Mahomes.  It is pretty cool to watch some of the GOATs finish up their careers and some of these young guns come in.    I hate the Yankees but I made it a point to watch Derek Jeter's last game.  He was a class act as is Brady in my opinion.

It should be a good game but I'm going to go with the NE transplant and the Bucs in a thriller, 34 -31.

Our crew took advantage of a night where temps...

Week #2 is in the books and we continue to make progress and terrain expansions.  This week will be...